Fountain water features generally speaking, including live fountains, springs, waterfalls and their matching water surface, so it can also be said that the point form of water features, but mainly focused on dynamic water features. Dynamic point-shaped water features should first be arranged with the surrounding environment, that is, in the garden what place should be arranged fountain what place should not be arranged fountain is the first thing we should consider, followed by how large the fountain, and then what kind of fountain arrangement. How to combine various fountains, with which the matching water surface to take what shape. The most classical fountains are arranged in front of the main building, or the center of the main square, forming the first visual center, and in scale with the scale of the main building or square. From the form is also mostly axisymmetric or symmetric to the garden center. The most used form is a large pool, the shape is mostly close to the garden or oval-shaped. The use of upward jets of water tongue and splash down around the water droplets, giving a fresh, magnificent, spectacular feeling. But its jet form is generally fixed jet height and form does not change with time, most do not match the lights, a few with white lighting, the role of lighting is mainly at night can show the fountain water tongue form. 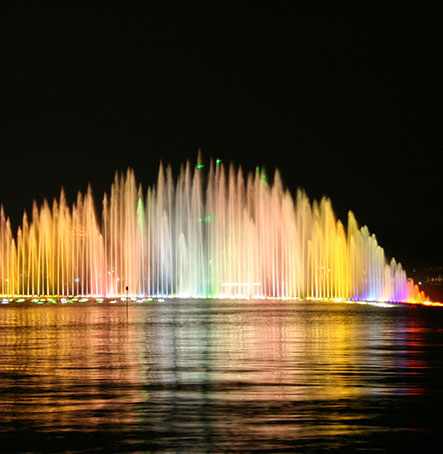 In recent years, due to advances in science and technology, automatic control, sound and light technology to electronic technology has also been introduced into the fountain construction, thus appearing in a variety of new fountains, this fountain not only in different forms, and its jet height, form and color will change with the time according to certain rules, some also with music, thus appearing sound-controlled fountain, time-controlled fountain, program-controlled fountain, etc.. Such fountains form a dynamic water features, so that the original fixed different buildings to add some change in the composition. And with the change in architectural style, some modern architecture to create a relatively large indoor space, so that not only in the outdoor fountain and indoor fountains are also arranged.

We design fountain water features, first of all, the overall layout, that is, where to arrange fountains, the layout of how large fountains, if what form of fountain, the overall layout is generally unified with the entire building group to consider, the fountain should form a unified and coordinated whole with the building. Therefore, the arrangement of the fountain should also be in line with the principles of architectural aesthetics, in particular, should make it consistent with the basic laws of formal beauty.

(1) neat and unified: can also be said to be simply one or neat and uniform, which is the simplest form of beauty. This is the most commonly used in the layout of the fountain law, which mainly refers to a large fountain with many individuals, when we commonly use the same specifications nozzle to form the same water modeling, which can be straight up the water column, can also be the downward flow of water tongue or upward fluttering tongue and some form of water splash. Neat is the same form repeatedly appear in succession to give a sense of rule, giving a sense of neatness and beauty, giving a sense of order. And neat can make a relatively small individual constitute a large whole, such as a small fountain in the square is very inconspicuous, but if a row of neat small fountain will give a deep impression. A thin fountain gives a thin feeling, but if the shape of a certain parallel, it will form a wall of water, a layer of water network and so on the impression. Of course, neat unity can not be absolute, by no means require all fountains in the entire square are the same, generally neat unity is a certain range, that is, within a certain range is the same and beyond this range, the shape has changed, and in another range is another shape of neat unity. This is called grouping unity. Each group has a unified form, and there is a difference between the group and the group. Grouping should be appropriate, if the number of groups is too many, the number of each group is too small, then it will go to the opposite of neat unity, it will be disorganized. But the scope of neat and unified should not be too large, and the grouping should not be too small, otherwise it will also go to the other side of the opposite, into monotony. Neat and unified principle should also be reflected in a fountain group should have a control element, the most common control element is the height, for the fountain is often set up in a certain location a great height of the main fountain, which will produce a strong impression, and some smaller other fountains are in a subordinate position, making the audience to the fountain group has a sense of the whole. The overall unity is also shown in the dynamic fountain to a certain cycle repeatedly reproduce a change in form, which is different from the overall unity of the space described earlier, is the overall unity in time.

(2) symmetry and balance: symmetry refers to a become the central axis, the left and right sides are equal, can also be relative to a central point of symmetry. Compared with neat unity, symmetry is considered to have a change, appearing as a difference in direction and position. Symmetry is the most commonly followed aesthetic rule in architecture, which is due to the fact that many things in nature are symmetrical, such as the position and size of the human eye, ear, hand and foot, the shape of various animals, etc. Therefore, humans are used to seeing more symmetrical things. So most of the ancient Chinese architecture is symmetrical. The vast majority of classical fountains are also symmetrical, and more symmetry with the main axis of the building as the central axis, modern fountains are also seeking to break the pattern of symmetry, trying to change, but the vast majority of fountain water features are still symmetrical as its basic tone.

Previous: JiaYue fountain company to introduce you to the fountain design

Next: Program-controlled fountain is how the design